For the past week and a half, my team has been working on an app that will help kids discover the many careers available in the US. Our goal is to take public data from the  Bureau of Labor Statistics and translate them into a readable format for mobile. In one feature, we wanted to create a map with the location quotient of a given occupation in every state from the BLS public API and show those values with a range of colors.

The result would be a map that looks something like this:

In the first iteration of this map, we decided on trying to recreate this BLS map.

USStatesColorMap is an Objective-C CocoaPod that draws a United States color map using the Stately font, a symbol-based font where each state is a glyph within the font. It was created originally for CSS and HTML, but USStatesColorMap makes it easier to incorporate into iOS projects as well. So great!

First add it to the Podfile and Install : pod ‘USStatesColorMap’

If your project is in Swift, create a Bridging Header File and add :#import

The method .setColorForAllStates will set a default color for all states. This can be overridden by using .performUpdates plus either the setColor:forState or setColor:forStateName methods. In Objective-C, the code looks like:

I ran into two issues using the CocoaPod. 1) In my Podfile, version “~1.0.1” did not work. By removing “~1.0.1” from the filename, the CocoaPod worked in my project. 2) The Stately font folder was not recognized originally by my project. After installing the pod, the file stately.tff had to be moved into the larger project in order for the compiler to find the reference and use it.

Here is a sample set of data that passes through the function:

When a dictionary of state names and Doubles is passed into the function, it looks like this: 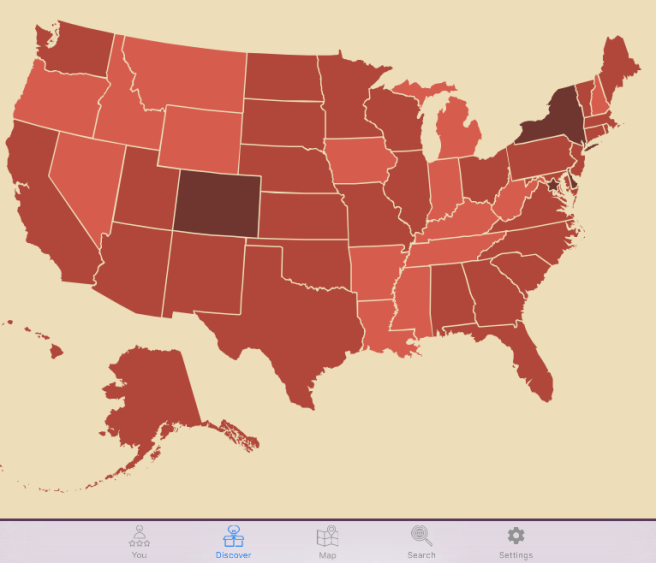 More Occupational Employment Statistics from the Bureau of Labor Statistics